Several weeks ago, I saw that our September sermon series was going to focus on the generosity of God. As I was thinking what song of response would work one Sunday, the closing words of an old hymn came to my mind: “for out of his infinite riches in Jesus / He giveth, and giveth and giveth again”. I looked up the hymn, entitled “He Giveth More Grace” and was struck by the text:

Fear not that thy need shall exceed His provision
Our God ever yearns His resources to share
Lean hard on the arm everlasting, availing
The Father both thee and thy load will upbear

This hymn was written by Annie Johnson Flint. She was orphaned by the age of 6, and became so crippled by arthritis that she couldn’t walk. Her arthritis prevented her from becoming a pianist like she had hoped, so she became a poet, and when she couldn’t open her hands to type, she would use her knuckles on the typewriter. An amazing story.

I didn’t know the original tune for this hymn, so I took that as an opportunity to write a simple melody and arrangement. We sang it this past Sunday at my church and judging from all the questions and emails I got about it, it struck a nerve with people and was a blessing.

I’m sharing the rough demo with you, as well as a chord chart, since my guess is that if your congregation doesn’t know this hymn, they might be affected by the truth it proclaims just like mine was.

I need your feedback and honest opinion on a song I’ve been working on.

It’s a song I’m writing for my congregation to sing this coming weekend as we look back on the last year for us (which has been a substantial one) and what’s coming ahead. I needed something that would be encouraging, point to Jesus, be a rallying cry, and be upbeat.

The line in the chorus “here we stand, we can do no other” comes from the great reformer, Martin Luther, who responded “here I stand, I can do no other” when pressed to recant his views. He refused.

In addition to being a song for my congregation, I wonder if this would work in any other context. This is why I need your help. Does the song work? Is it a keeper? Give me your honest critique. If it’s a keeper it will probably make its way onto my church’s live CD that we’re recording this coming weekend. Hence my plea for feedback.

Here’s the audio to a very rough demo (!) of the song.

And here are the tentative lyrics:

Here We Stand (We Can Do No Other)

Verse 1
Oh church, lift up your eyes, up from the waves
And look on Jesus’ face
Oh church, you should not fear. He’s strong to save
So lean on Jesus’ strength

Oh church, God will not fail.
He never breaks His covenant
Oh church, He will prevail, through every age
So trust in Him

Tell me what you really think! 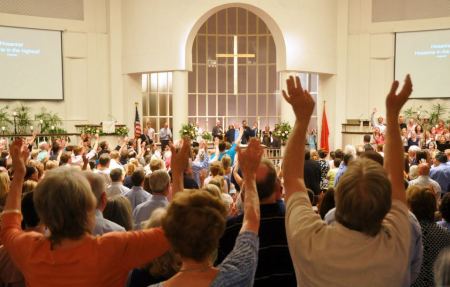 Having grown up in the Episcopal/Anglican church, one of the hymns I grew up learning to sing and love was “Praise My Soul the King of Heaven”. The first time you hear it the melody is a bit tricky. But it’s good. And the lyrics are full of powerful descriptions of the kingship and worth-ship of Jesus. But I never had much success putting the hymn in a more contemporary format.

One night in 2009 I was watching the consecration of Bob Duncan as the first Archbishop of the Anglican Church in North America and during the incredibly long procession of clergy and bishops, the orchestra and choir led the congregation in a powerful arrangement of the hymn. It turns out that John Wasson, a worship leader/musician in Texas had written the arrangement just for that occasion.

You can watch the really long procession and hear John’s full arrangement on this rough YouTube video:

It wasn’t long until I was trying to rip off John’s arrangement to use this hymn at my church. I experimented (with varying levels of success), but the result was that I had found a way to bring this amazing hymn into a contemporary context. The other small change I made was to close the song by going back and singing the last line of first verse after singing the final verse. It ends better that way.

When my congregation received word that we’d have to vacate our property of over-275 years, and I started exploring the prospect of recording a live CD in our Sanctuary before we lost it, I knew we’d have to put this hymn on it and try to capture a bit of the arrangement John had written in 2009. But… it couldn’t be as incredibly long.

So I sat at my kitchen island one night, about 6 days before we’d start recording the CD, watching the video of the song from Bishop Duncan’s installation, hearing Carl Albrecht‘s drumming in my head (since I’ve been listening to his drumming since I was a kid and he had kindly agreed to play drums for this project), Russell Crain’s electric guitar genius (since I had come to admire his playing when my Father-in-law began pastoring a church that neighbors his), and Simon Dixon’s organ prowess (since he and I have the privilege of working together).

I wrote a rough arrangement of it and recorded this really (really) rough demo. Oh, I was recovering from the flu, I just remembered:

Like I said, it’s rough. So when we began rehearsals for the CD, Carl suggested we cut the intro by half. Great idea. Then Russell began experimenting with different things he could do on the intro. On the first night we recorded, here’s what the intro sounded like:

Russell thought he could do his part better, so on the second night, he changed some things.

The result of all of this thinking/arranging/demo-ing/rehearsing/tinkering is on my church’s live CD. Here’s the final full-song result in its mixed and mastered form.

Here’s the chord chart we used for the recording. If you want a more simple chord chart (without the crazy chords on verse 4 that we put in to work with the choir descant, click here).

Here’s my church singing the more simplified version of this hymn in our last service ever in our building. The picture at the top of this post is from that night too.

One of the songs on my church’s new live worship CD that I wrote is called “God of All Power and Grace”. I wanted to share the story behind the song, the lyrics, and then a free recording and chord chart.

I wrote the bulk of this song several years ago in my church’s former main sanctuary. I had been on staff at that point for a couple of years and had been witnessing God making our worship more and more free on Sunday mornings. I was trying to find a song that helped articulate what we were experiencing in corporate worship, since this kind of freedom was new to a lot of people. We weren’t just singing words off a page or off a screen. We were actually encountering the glory of God together and experiencing his manifest presence  as we sang to him.

So I ended up writing this song to help us express three things: (1) praise to God, (2) reasons why we praise God, and (3) what happens when we praise God. God is the God of all power, but also the God of grace who calls us to himself and helps us to praise him. The lyrics evolved a bit over the years and we finally settled on these for the CD:

Verse 1: God draws near to us when we praise him

Chorus: We gather to magnify the name of Jesus – and as we do that, God frees us even more

We lift You up, we glorify
You who are worthy, You who are mighty to save
Be lifted up, be glorified
Here in Your presence, You free us to offer You praise
God of all power and grace

Verse 2: Jesus is worthy of worship because he saved us and bought us with his blood

God of all power and grace
We who were lost have been saved
So we lift our voice to bless You
God, our Redeemer and Friend
We know mercy and love without end
So we lift our song before You

Verse 3: Our worship here on earth is a foretaste of worship for all eternity

You can purchase the whole live CD here.

You can download a free mp3 of this song here: God Of All Power And Grace MP3

You can download a free chord chart of the song here: God of All Power and Grace CHORD CHART

I’ve always loved the hymn “Here is Love Vast as the Ocean“. It’s a beautiful melody, but most importantly, it’s a beautiful description of God’s great love for us in Jesus Christ.

The first two verses, written by William Rees, are probably familiar to you:

Here is love, vast as the ocean,
Lovingkindness as the flood,
When the Prince of Life, our Ransom,
Shed for us His precious blood.
Who His love will not remember?
Who can cease to sing His praise?
He can never be forgotten,
Throughout Heav’n’s eternal days.

On the mount of crucifixion,
Fountains opened deep and wide;
Through the floodgates of God’s mercy
Flowed a vast and gracious tide.
Grace and love, like mighty rivers,
Poured incessant from above,
Heaven’s peace and perfect justice
Kissed a guilty world in love.

The third verse is less familiar, and the fourth even less familiar than that. They were written later by William Williams.

We’ve used this song at my church for years. Either just the first two verses during our communion liturgy, or for a while we used Matt Redman’s adaptation. That version had the chorus added: “No love is higher, no love is wider, no love is deeper…”. Great version, which also added the third verse, but the chorus never really seemed to catch on very well with my congregation. 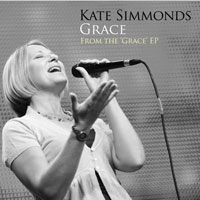 So I was really pleased to come across Kate Simmonds’ version a year or so ago. You might recognize Kate’s name as she used to lead worship at the Church of Christ the King in Brighton, England, along with Stuart Townend, Lou Fellingham and others. Kate’s version put the song into a 4/4 time signature, incorporated the third verse with more modernized language (and a different chord progression), and added a fantastic chorus.

Here are the lyrics to the chorus she added:

Grace takes my sin, calls me “friend”
Pays my debt completely
Love rescued me, seated me
With my King forevermore

I love that! So good. This really caught on with my congregation, and we recorded it on my church’s recent CD. By the way, you really should purchase the whole CD.

Kate has very kindly agreed to let me offer the mp3 and chord chart for free here.

So here is the mp3: Here Is Love (Grace Takes My Sin) MP3

And here is the chord chart: Here Is Love (Grace Takes My Sin) CHORD CHART

The vocalist on this recording is the amazing Jordan Ware. Jordan is the worship leader at Winchester Anglican Church in Winchester, Virginia. She’s a gifted worship leader and musician and it was a joy to have her sing on this project!