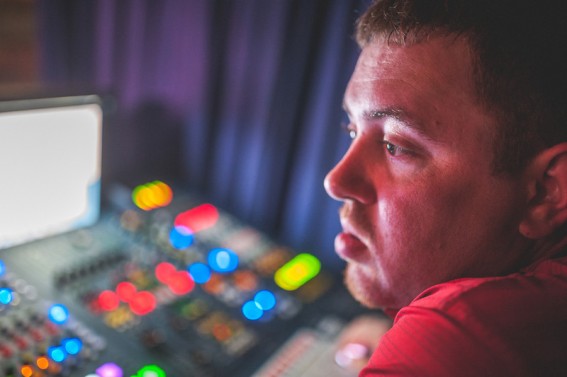 A few years ago I shared some thoughts on how to annoy your sound engineer. They seemed to be helpful to people so I thought I’d share some more. Obviously, you might not want to implement all these suggestions on the same Sunday.

Have long rehearsals
Sound engineers have nothing better to do than sit at the console while you rehearse that one song again. They love being trapped there while you figure out what songs to do. They don’t mind a bit not being able to go home and sleep because you’re goofing around. It’s fun for them!

Sing like you’re telling secrets
If you can master the art of singing with a whimpery, yet raspy, yet emotional, yet passionate, yet secret whisper from the inner regions of your soul, your sound engineer will have no trouble at all finding a good place for your vocals in the mix. Bonus points if you choose random moments to sing normally before reverting to the whisper again. It’s hilarious.

Tell him what you think about the mix when you’re on stage
You’re standing on stage. You’re behind the speakers. You can’t actually hear what it sounds like in the room. But go ahead and tell him it sounds like your guitar isn’t loud enough. Keep telling him. Until your guitar sounds loud enough to you. You’ve successfully made him your best friend.

Expect him to do eight things at once
1. Run sound. 2. Run monitors. 3. Run projection. 4. Record the sermon. 5. Hand out assisted-listening devices. 6. Control lights. 7. Play the video at the right time. 8. Touch your ears. He’s superman.

Give feedback feedback
He loves when you do this! Hear feedback? Tell him you hear feedback. Try to recreate the feedback by thumping your mic with your pointer finger. Or, better yet, try to fix the feedback by holding the palm of your hand over your mic. Then you might create even worse feedback, in which case you can prove to your sound engineer that you really were hearing feedback. Then he might kill you.

What am I missing (besides my Latte)?

In this new year, I think all worship leaders can agree on a few resolutions that, if adopted, would dramatically improve the corporate/sung worship in our churches.

1. Wear more scarves
People are cold. Even in Southern California. They need to see their worship leaders all bundled up and warm. The more scarves the better. Oh and don’t forget the hat.

3. More of the 1980s
So apparently the 1980s called and they have some more synthesizers they want us to use in our music. I say we shouldn’t stop at the synthesizers. Let’s bring back those electric drums and make sure we stick the big poofy foam things on the ends of our microphones (color coded, preferably).

4. It’s time to re-tune the re-tuned hymns
I’m calling it right now. New worship music trend: re-tuned re-tuned hymns. It’s like twice-baked potatoes or double-stuffed Oreos. It’s like dipping a deep-fried Snickers back into the deep fryer and then frying it again. These re-tuned hymns need to be re-tuned again. You heard it here first.

5. More retweets
If it’s one thing worship leaders need to do more of, it’s retweet any and all twitter mentions. There is a severe shortage of worship leader retweeters, and 2014 must be the year we begin to retweet, and then retweet the retweeted retweets, while eating twice-baked potatoes stuffed with double-stuffed Oreos while wearing scarves made out of iPads.

6. Incorporate holograms
I’m tired of my congregation having to settle for me leading Chris Tomlin songs. I want him to lead his songs via hologram at my church. Let. The. Future. Begin.

Beginner: Come on, get your hands together!
Intermediate: Shout it out, church!
Novice: Now put those worship cookies in the oven and watch them bake!
Expert: You are now free to move about the cabin of praise!
Advanced: Giddy-up, giddy-up, giddy-up, let’s go!

8. Bring back the hand motions
Can I get a “you came from heaven to earth to show the way”? That’s what I’m talking about.

9. Point the microphone to the congregation when you want them to sing
I learned this technique from Carman, (i.e. America’s first worship leader). You want the crowd to sing? Point the mic at them. Ignore your sound engineer’s advice on this one. Wave the mic around, and in as many directions, as much as possible. The more microphone pointing, the louder the congregational singing. Add on a catchphrase and you’ve got solid gold.

10. Move beyond the octave jump
Octave jumps are so 2013. It’s time to take it to the next level in 2014 with the octave MONSTER jump. The octave MONSTER jump isn’t just one lame octave up. It’s two octaves up. That’s right. You want to take that bridge and third chorus to the next level? Then take a deep breath, tighten your scarf, turn on your iPad, crank your synthesizer up to 11, put down your double-stuffed Oreo, get ready for some Twitter mentions, push the Chris Tomlin hologram out of the way, yell out an advanced catchphrase, get that hand motion cued up, point that microphone back to your mouth, and let that octave MONSTER jump rip. Your people will never be the same.

Here’s to a great 2014, worship leaders. Get busy and stay warm. 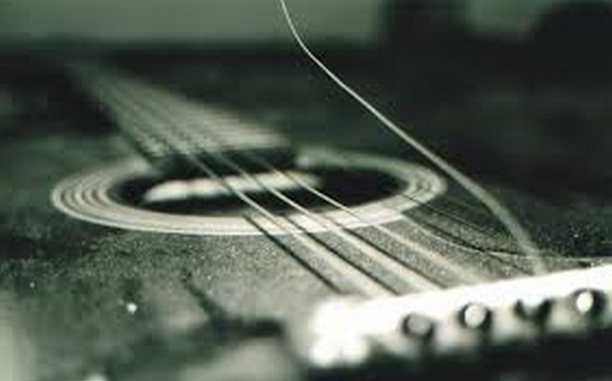 Here’s a story (and audio clip) about how I broke a string in front of 1,400 people while recording a live CD and used a joke I stole from a worship leader’s Facebook group to salvage what could have been a really awkward moment.

About a year ago I joined a Facebook group called “Liturgy Fellowship“. It’s a group where a bunch of worship leaders who lead in contexts where some sort of liturgical structure is employed and/or valued share ideas, ask questions, and stay in touch. I’m not terribly active in the group, but I do check in from time to time since I’m curious about what other worship leaders are up to and dealing with.

A few weeks ago, a worship leader in the group shared that he had broken a string and used a joke Reggie Kidd had shared that the word “Selah” in the Psalms actually meant “ah shucks, I broke another string”. Reggie Kidd commented that the joke actually came from Eugene Peterson in his book Answering God where he wonders if “Selah” was actually a cuss word David used when he broke a string.

I thought this was really funny. So I made a mental note to tuck this little joke away in case I ever needed it in the future.

So, finally, back to the live recording in front of 1,400 people when I broke a string used the joke.

Last weekend we devoted our worship services to an extended time of worship and celebration of God’s faithfulness and goodness to us, after a year of considerable upheaval and change for our church. We recorded a live album last year before leaving our campus of over 275 years, and this year we wanted to capture our congregation continuing to proclaim God’s faithfulness and the power of the Gospel. (This is why this blog has been so quiet for a while, by the way).

On Thursday, the first day of our rehearsals, I put new strings on my guitar. I used those strings during all-day rehearsals on Friday and Saturday, and a recording on Saturday evening. That’s a lot of play.

So, on Sunday morning before our big combined service with everyone in one room, I wondered whether I should put new strings on. Nah, I thought, I’ll be OK.

We opened with three songs. A call to worship, Matt Redman’s “How Great is Your Faithfulness”, and “Crown Him with Many Crowns”. During the last few measures of “Crown Him…” I felt the dreaded pop. This wasn’t good. We still had about 12 more songs to get through. Oh. No.

Thankfully, after “Crown Him”, our pastor, John Yates, was supposed to come up and welcome people, pray, and lead us the prayer for purity. I thought that if I moved at lightening speed, I could replace the E string in that time. I wish.

So I rushed over to my case. No strings. I rushed back to where I thought they could be. Not there. Asked one of the electric guitarists if he had any. He said no. I run back to my case. I find them. I get back to my guitar just as the prayer for purity is ending and my pastor is walking back to his seat.

Then I remember. The Facebook group. The Selah joke. I can’t quite remember how it’s supposed to go. But I use it. I try to tell it as well as I can. Please work. Help me Lord.

And it works. They laugh. So I ask John to come back up and “share something from his heart” for 2 minutes. He plays along. People laugh. And I change my string faster than I’ve ever changed a string in my entire life.

Then we keep on going and record 12 more songs.

So, thanks to my friends on the Facebook group for sharing that excellent joke. Thank you, Lord, for in your providence pointing me to that joke weeks before I’d need it because you knew I’d need it. And thanks to my congregation for laughing.

I will likely use this joke again. And you should too. It’s a good one.

Here’s how it sounded, from the last sentence or so of the prayer for purity, during which I was running around on stage like a mad man. 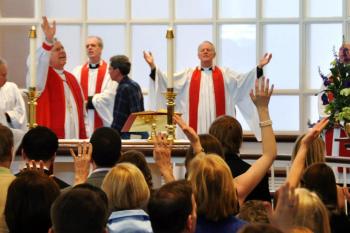 This past weekend I had the privilege of leading worship in Southern California for the Diocese of Western Anglican’s Kingdom Conference. This diocese is made up of congregations that were once in the Episcopal church but have left to remain faithful to Jesus and Holy Scripture, and now belong to a new diocese together in the Anglican Church in North America. It’s exciting to see how God is reforming and working in the Anglican church.

I’ve belonged to an Anglican church my entire life. Many years in Episcopal churches, and more recently as part of the churches that have left and been aligned with the new American branch of Anglicanism.

I taught a seminar on Saturday titled “Ten Ways Anglican Churches Can Grow in Worship“. Tomorrow I’ll share the important stuff that I said, since I think a lot of it applies in non-Anglican churches too. Today I thought I’d share the joke I started off with.