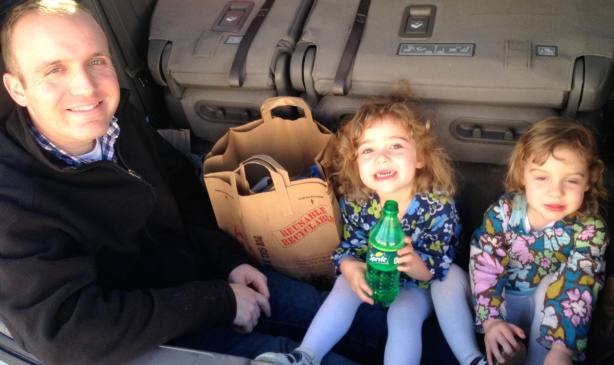 Much of my childhood was spent sitting in a minivan. A Dodge Caravan to be exact. In 1994 we upgraded to a stylish Toyota Previa (and by “stylish” I mean “hideous”) which we took all around the country on summer vacations. I even learned to drive that wonderful automobile.

So before I got engaged I bought a Ford Escape. Not as manly as an Explorer, but not as girly as a Jetta (no offense). Then, after several years, including marriage to Catherine, the birth of our first daughter, and the impending birth of our second, I traded in the Escape for one a massive, gas guzzling, four-wheel-drive, dark blue, rugged, menacing Chevy Tahoe.

My ego was thrilled. My pocketbook, however, was not. Turns out that Chevy Tahoes use a lot of gas. And if you need to put 4 new tires on it, those tires cost a lot of money. And they’re not cheap to insure. And the county likes to charge you a lot of taxes every year to register the behemoths.  Not to mention the pesky debt I had plunged us into.

It was extremely impractical for my growing family. Yes, you could fit a killer whale in the back (or so I’ve heard), but it wasn’t terribly easy for Mom to reach back and fetch a dropped pacifier in the middle of a grueling five-minute drive to the grocery store. But, darn it, it was NOT a minivan.

Last week we traded in the Tahoe for a Honda Odyssey and I couldn’t have been more excited.

How could a die-hard anti-minivan SUV driver have such a change of heart? I think Jesus did it. I began to see how a different car would serve my wife and kids better in the small spaces of a grocery store parking lot. I began to see how owning a massive Tahoe wasn’t good stewardship of our finances, nor a wise investment. Jesus melted my heart of stone and replaced it with the heart of a practical Dad.

Jesus is in the business of melting hearts of stone. He does it at his pace and in his time. Just two months ago I wouldn’t have been ready. But a week ago it was perfect timing. Jesus knows what he’s doing, he knows how to work on stubborn resistance, and he can turn ardent opponents into tender recipients.

You can picture the faces of ardent opponents, or stern-faced resisters, in your congregation as you read this. They stare at you during worship with a look that says “I am not impressed”. They look down on you and you wish you could do something about it.

Pray for them. It’s as simple as that. Pray that Jesus melts their heart of stone. And smile at them too. Maybe even offer them a ride in your manly minivan.

One thought on “Jesus Can Melt Hearts of Stone”