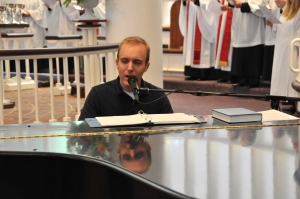 Every church has its own liturgy.

Some forms of liturgy are less obvious: the worship leader always starts the service by inviting people to stand, the sermon is at the end, the announcements are before the sermon, we sing upbeat songs then sing slower songs, etc.

So here’s fact number one: There is no such thing as a non-liturgical church. Some are more so than others, but every church has its own customs, its own traditions, and its own normal pattern for corporate worship.

But there is a big difference between what a non-denominational service looks like when compared to a Presbyterian service. It doesn’t take a rocket scientist to figure out that some services are fairly loose and informal, while other services are more structured and formal.

And in those churches that employ a more liturgical form of corporate worship are worship leaders who are struggling with how to work within those constraints. It’s a struggle. There isn’t as much wiggle room and freedom in a highly liturgical church as there is in a “non-liturgical” church (although even those churches do have liturgy).

That’s a bold statement, I know. But I believe it’s true. Every church presents its own challenges, and every worship leader faces different circumstances. But speaking specifically to the exercise of leading people in corporate worship in song: it’s harder to do within the confines of formal liturgy.

I was born and raised in the Episcopal Church. Every Sunday of my life, from birth through my sophomore year of college, the service format was a by-the-book (Book of Common Prayer, that is) Holy Communion service. I know the book. I know the liturgy. And I’ve learned to love the liturgy, and see its structure not as being a constraint on my worship leading, but as providing scaffolding on which I can stand.

These next several posts are geared entirely toward people who lead worship in a church that utilizes a more formal liturgy. If you’re in a more informal church, you might not find a lot that applies to you. But if you serve in a church where the pastors are called priests, the lobby is called a narthex, your board of elders is called a Vestry, your green room is called a sacristy, your stage is called the chancel, your opening song is called a processional, you have hard-covered books of common prayer/common worship in the pews (not seats), and you know what a Sanctus is, then I hope you find some of what I have to say helpful.

So while I do believe that it’s more difficult to lead worship in the context of a formal liturgy, I want to encourage those of you who do, and help you thrive within the confines (and know when they can be broken out of).

I’ve titled this series: “thinking surgically when leading liturgically”. It’s a clever name and it rhymes, but I hope it makes a point. And that’s fact number three: you can work with the liturgy to make a service come alive.

It takes careful and prayerful planning. It takes getting familiar with the liturgy. It takes some boldness. And it takes knowing when to tinker and when not to tinker. But it can work. Liturgy doesn’t have to be a force of lethargy and robotic deadness in your services.

Your congregation can experience vibrant, Christ-centered worship in a liturgical setting. It’s more difficult, but it’s possible. Trust me. Tomorrow we’ll start looking at how.

One thought on “Thinking Surgically When Leading Liturgically”