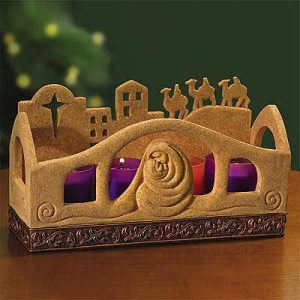 Yesterday I mentioned that we’re in the midst of the season of Advent and suggested some ways worship leaders can make the four Sundays in this season feel Adventy. No, “Adventy” isn’t a word, but you know what I mean. Click here to see yesterday’s post. Basically, you don’t want to sing Christmas songs until Christmas.

There are many great traditional hymns that work well during this season. There are also a good number of more contemporary songs that are fitting. Here are some suggestions:

Some new (congregational) Advent songs
“Creation Sings the Father’s Song” Stuart Townend, Keith and Kristyn Getty. (iTunes download)
I wrote in detail about why I like this song so much a few months ago. You can see that post here. Basically, the song hits on the themes of creation, fall, redemption, and consummation in 3 verses and a chorus. Amazing. The third verse is great for Advent, talking about how “creation longs for His return…”

“Glorious” Paul Baloche and Brenton Brown. (iTunes download)
Off of Paul Baloche’s new CD of the same name, the last verse sings of how “the hope of his returning fills the universe”.

“Almighty” Paul Baloche and Brenton Brown. (iTunes download)
Again, off of the new CD “Glorious”, this song is full of imagery of Jesus’ return. Here’s verse three: “One day You will judge the nations, You’ll reward Your servants, both the great and small. On that day, those who rose against You will finally confess You as the Lord of all.”

“There is a Higher Throne” Keith and Kristyn Getty. (iTunes download)
A song full of the hope of heaven. Very easy to sing, a great and catchy chorus, and rich truth.

“From the Squalor of a Borrowed Stable” Stuart Townend. (iTunes download)
Great song. Verse 1: Jesus is born. Verse 2: Jesus lives among us, is tempted in every way as we are but does not sin. Verse 3: Jesus suffers death in our place on the cross, defeating death. Verse 4: Jesus reigns victoriously at his Father’s right hand, “interceding for His own beloved, till His Father calls to bring them home”. Wow.

“Glorious and Mighty” Joel Sczebel, Todd Twining and Bob Kauflin. (iTunes download)
Verse three says: “Majesty, we’ll sing with creation when You come again in the clouds. Every knee will bow down and worship the one true God”.

“Lord, We Wait” Stuart Townend, Keith and Kristyn Getty. (iTunes download)
This isn’t one of Townend/Getty’s most well-know songs, but I think it’s a fantastic song for Advent. It’s short, easy, and right on target for this season. Verse 1 says: “Lord, we wait for the day of your appearing. Lord, we wait for your coming in the clouds”. Verse 2: “In that day, death is swallowed up in victory. In that day, sin and death shall be no more”. The chorus declares: “with a shout the trumpet will sound and the dead will be raised to life, and we will meet him in the air”. Great Advent song.

“There is a Redeemer” Melody Green (iTunes download)
This might be considered a “hymn” in some circles, but in other circles it’s still pretty new. Either way, it’s still a great song. It points us to Jesus “our Redeemer, name above all names”, reminds us that he was slain for sinners, that we “will see his face” when we “stand in glory”, and reminds us that God has given us “His Spirit till the work on earth is done”.

Remember: we aren’t waiting for Jesus to be born. We are waiting for him to return
Songs that express a longing for the birth of the Messiah in Bethlehem might work well for Christmas pageants, but might be confusing in a congregational context. As we say in the communion liturgy in Anglican churches, “Christ has died, Christ is risen, Christ will come again”. I’m looking for songs that help articulate a longing for the risen and victorious Jesus Christ to return. Sure, it would be easier (and more fun) to crank out “O Come All Ye Faithful” or “Joy to the World” the first Sunday of December. But we wait.