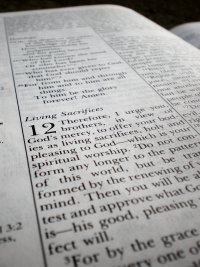 A few years ago, I realized I had developed a bad habit of saying “let’s stand together and worship” whenever I got up to lead some songs. It didn’t matter if it was the beginning, middle, or end of a service. It was what I said to get people to stand and sing after a time of prayer, the sermon, announcements, etc.

Someone finally pointed out to me that by saying “let’s stand together and worship” I was unintentionally sending two messages. First: worship is only singing. Second: what we have just been doing is not worship. Neither are true, of course, but you wouldn’t be able to tell I thought so if you listened to what I was saying.

I was also leaving off one important detail: who we are standing to worship. “Let’s stand together and worship” is not only inaccurate but it’s incomplete.

I can help the congregation see the whole service as a time of corporate worship and be reminded to whom we’re directing our praise by choosing my words carefully even when I’m just asking them to stand up. Here are just four examples:

Notice I use the word “continue” a couple of times. This is a gentle reminder to the congregation that “worship” doesn’t stop when the songs stop.

I also try to keep the fact that God is the object of our worship from being assumed. We can very easily just say things like “we’re going to worship” or “you all are really worshipping!” without realizing that we’re subtly teaching that God is a spectator of our worship rather than the receiver.

Even the title “worship leader” misses the mark. I use it because, like it or not, it’s now a part of the lexicon and is generally understood to refer to the person who leads the singing. But while the title may be inaccurate and a tad misleading, our words don’t have to be!

One thought on ““Let’s Stand Together and Worship””